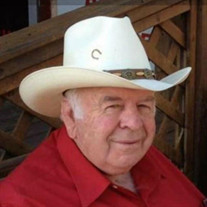 Charles Edward “Edd” Richards was born on March 17, 1936 at his home in Owasso, Oklahoma to Fred Richards and Mary Ann (Courtney). He died on Thursday, December 31, 2020 in Tulsa, Oklahoma at the age of 84 years. He was raised and educated in Owasso and graduated with the Owasso High School Class of 1954. Edd then attended classes at the University of Tulsa where he studied religious seminaries. He was married on January 18, 1954 at Collinsville Assembly of God Church in Collinsville, Oklahoma to Ruby Francis (Miller) Richards. Edd was a business entrepreneur and explored many different venues in his working life. He had a passion for graphic design which led him to open T-Shirt Express in Owasso, where he designed signs, shirts, and hats. Edd was ordained in the Assembly of God Church and was a longtime faithful member of the Assembly of God Church in Owasso and had most recently been attending Eastland Assembly of God in Tulsa. He enjoyed public speaking and was a member of Toast Masters, a group that practiced public speaking and presentations. In his spare time Edd enjoyed farming and graphic design, but most of all he loved people and never met a stranger.
Those he leaves behind who hold many cherished memories include:
2 Sons;
Eddie Richards and wife Dianna
Freddie Richards and wife Dianna
5 Grandchildren;
Michelle Gagnard and husband Brent
Bart Smith and wife Isabell
Boss Richards and wife Ashley
Kristi Hancock and husband Matt
Leslie Hansford and husband Dustin
12 Great Grandchildren
Brother;
Bob Richards and wife Joan
Sister;
Freda Fruiechting and husband Jerry
He was preceded in death by his parents, Fred and Mary, wife, Ruby, and grandson, Kole.

A funeral service will be held 10:00 a.m. on Monday, January 11, 2021 at the Mowery Funeral Service Chapel in Owasso. There will be a visitation one hour prior to the service. Interment will follow at Floral Haven Cemetery in Broken Arrow, Oklahoma. Arrangements and services were entrusted to Mowery Funeral Service.
Post Views: 93