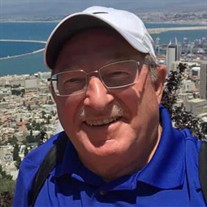 Thomas “Tom” Franklin Blackwell was born on June 14, 1950 in Hominy, Oklahoma to Alvin Dale Blackwell and Nadine (Chambers) Blackwell. He passed from this life on Sunday, Nov. 15, 2020 in Owasso, Oklahoma at the age of 70 years. Tom was raised and educated in Barnsdall, Oklahoma and graduated with the Barnsdall High School Class of 1968. He served in the Army National Guard for a full term. Tom earned his bachelor’s degree in accounting from the University of Tulsa and his Executive MBA from the University of Houston.
He was married on June 4, 1971 in Barnsdall to Gloria Dawn (Shreffler) Blackwell. Tom worked at British Petroleum for over 31 years, traveling all over the world from Alaska to South Africa, India to Venezuela, making friends wherever he went. After retirement he developed a passion for hiking and archaeology. His adventures saw him summit Mt. Kilimanjaro, dig at a Roman fort in northern England, uncover the remains of the biblical city of Bethsaida in Israel, dance to Jimmy Buffett, and celebrate his many fantasy football championships. Above all else, he loved spending time with and spoiling his kids and grandkids.

Those he leaves behind who hold many cherished memories include his wife, Gloria Blackwell; two sons, Beau Blackwell and his wife Storey, Dustin Blackwell and his wife Raelynn; three grandchildren, Dylan, Dashiell, and Penelope; mother, Nadine Blackwell; father-in-law, Herb Shreffler; and four siblings, Virginia Carroll, Marilyn Alltop and husband Tom, Tim Blackwell and wife Evie, Lori Tisdale and husband John. He was preceded in death by his father, Alvin; his brother, Jerry; and his granddaughter, Anna.

Visitation will be from 4:00 p.m. to 8:00 p.m. on Thursday, Nov. 19, 2020 at Mowery Funeral Service in Owasso. Graveside service will be held 11:00 a.m. on Friday, Nov. 20, 2020 at Ethel Reece Cemetery in Barnsdall, Oklahoma with Jason Byers, Pastor of the Assembly of God Church, officiating.
In lieu of flowers, please consider donating in Tom’s honor to one of these organizations:
Independence Bible School
2246 S. 10th St.
Independence, KS 67301
www.independencebibleschool.com/giving