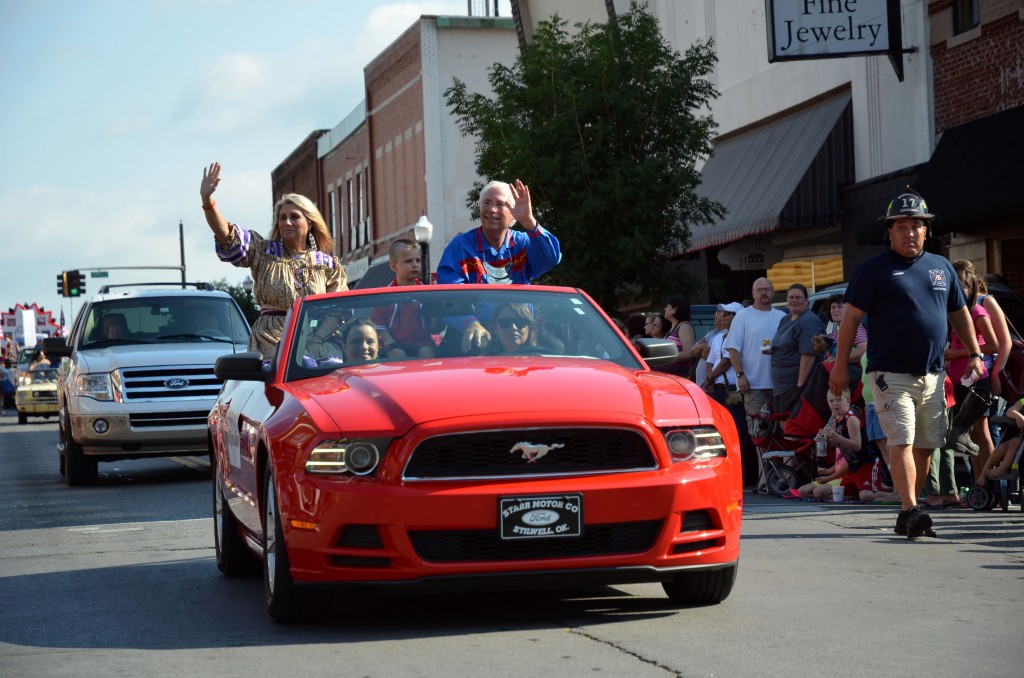 TAHLEQUAH, Okla. — More than 100,000 visitors are expected for the 63rd Cherokee National Holiday, which runs Sept. 4-6 in Tahlequah. The tribe’s largest annual celebration commemorates the signing of the Cherokee Nation Constitution in 1839.
This year’s “reunion” theme incorporates family gatherings and large-scale activities and extends this year to the bison herd that has returned to Cherokee Nation soil for the first time in 40 years.
New attractions this year include a performance of “Peter and the Wolf” in Cherokee, tours on Cherokee ethnobotany, a reunion for descendants of former Principal Chief John Ross, a tribal film festival and free trolley transportation around Tahlequah. Annual favorites also return to the Cherokee National Holiday, such as the only parade emceed in Cherokee, the State of the Nation address by Principal Chief Bill John Baker and one of the largest intertribal powwows in the country. All events are free.
“The Cherokee National Holiday is something we look forward to each and every year. It marks the largest homecoming of Cherokee citizens and is a three-day celebration of Cherokee history and heritage,” said Cherokee Nation Principal Chief Bill John Baker. “From the annual powwow to the downtown parade, cultural demonstrations to the traditional games, great food and wonderful music, there is something for everyone to experience. We encourage everyone to come enjoy the hospitality of the Cherokee Nation.”
Dance students from Encore Performing Arts in Tahlequah will perform “Peter and the Wolf” to a recording in Cherokee by the Cherokee National Youth Choir at 2 p.m., Saturday, Sept. 5, at the Tahlequah Armory Municipal Center.
Officials with the Cherokee Nation Seed Bank and Native Plant site will give tours on traditional Cherokee plants and feature author Clint Carroll, assistant professor of American Indian Studies at the University of Minnesota. Carroll will show a short film on Cherokee ethnobotany in an effort to bridge the gap between traditional Cherokee elder beliefs and modern mindsets. The event is noon to 5 p.m. Friday, Sept. 4, and 9 a.m. to 5 p.m., Saturday, Sept. 5, in the Osiyo Training Room behind the Restaurant of the Cherokees.
The tribe’s One Big Family Reunion event is scheduled from 1-4 p.m., Saturday, Sept. 5, at the W.W. Keeler Complex. It is designed to help Cherokee citizens trace their family lineage to the Dawes Roll. Tribal officials are hoping to use data collected to create a family tree database similar to Ancestry.com.
The Ross Family Reunion will be held at the American Legion Post 135, located on the north side of Tahlequah, at 1:30 p.m., Saturday, Sept. 5.
The Tribal Film Festival features more than 45 native films. It will be hosted at the Dream Theater in downtown Tahlequah from 11 a.m. to 11 p.m. on Saturday, Sept. 5.
Annual favorites, the Cherokee National Holiday parade will offer more than 100 floats or marching bands winding down Muskogee Avenue in downtown Tahlequah. The parade will begin at 9:30 a.m. on Saturday, Sept. 5.
Following the parade, Chief Baker will deliver his State of the Nation address at 11:30 a.m. at the Cherokee Nation Capitol Square. The speech has been a tradition at this site since the mid-1800s for citizens who want to hear highlights from the tribe’s year of progress.
The Cherokee National Holiday Powwow offers more than $35,000 in prize money for Southern Strait, Northern Traditional, Fancy, Jingle and other dance categories. The powwow was named as the second largest powwow in the country by Indian Country Today in 2014. It’s held at the Cherokee Cultural Grounds and begins at 5 p.m. on Friday, Sept. 4, and continues Saturday, Sept. 5, starting at 2 p.m.
The 10th Annual Cherokee Holiday Art Show on Sept. 4-6 at the Tahlequah Armory Municipal Center features Native artists from across the country. A children’s fishing derby with 300 fishing poles donated by professional angler Jason Christie and his sponsor, Lew’s, will be given away to the first 300 participants. It kicks off at 7:30 a.m. to 11 a.m., Saturday, Sept. 5. Traditional games, art and food vendors, a car show, fireworks and a performance Sunday, Sept 6, by the Pumpkin Hollow Band are also part of the lineup.
The Cherokee Nation will offer free trolley rides between event sites Sept. 4-5. To find a complete list of the 63rd Cherokee National Holiday events, visit www.cherokee.org and click on the Cherokee National Holiday quick link.
Post Views: 175