Spread the love
The Oklahoma Department of Transportation is facilitating cities and counties along historic Route 66 to offer them a new way to spruce up their section of the historic highway ahead of the Mother Road’s 2026 centennial.
ODOT’s Traffic Division recently released pavement marking guidelines to local governments that have sections of Route 66 on state or federal highways within their jurisdiction. Several cities statewide have asked for a way to additionally highlight their section of the route, and are now welcome to use this guidance to begin the process of adding pavement markings.
“I appreciate the enthusiasm of cities and towns along Route 66 who are looking for more ways to highlight their connection to this storied route. I also appreciate ODOT’s efforts in making these new pavement markings happen. These are another visual guide to help motorists know they are on track along one of the most traveled routes in our nation’s history,” said Lt. Gov. Matt Pinnell. “We want those who visit the state’s more than 400 miles of the historic route to feel the connection from city to city and these pavement markings just add to that effort.”
The 21-foot by 8-foot black and white markings will be approved by the department for the historical alignment of Route 66 and will be done in partnership with cities and counties. Each entity will pay for pavement markings in their area. For safety, the markings are intended for installation on sections with a speed of 35 mph or less and they cannot be spaced any closer than one per lane per mile.
The department worked closely with cities, the Oklahoma Route 66 Association and the Route 66 Alliance in association with the Oklahoma Route 66 Centennial Commission in developing the standards.
“The department is thrilled to support this historic centennial and the Oklahoma Route 66 Centennial Commission’s efforts to highlight the route ahead of celebrations. This will further help cities bring attention to Route 66,” said Secretary of Transportation Tim Gatz.
The markings will be uniform statewide with the exception that cities and counties may add their name into the design after their application is accepted. The department will work with cities to connect them with vendors to provide installation estimates.
“We are so honored to have Route 66 run through the center of Yukon. People from all over the world come to travel this historic route and to be able to identify it with the pavement markers will increase the draw to this section of our community while promoting all that Route 66 has to offer in our city,” said Yukon Mayor Shelli Selby.
Entities along the route also are encouraged to find a nearby location for additional pavement markings such as a parking lot adjacent to the route to provide a safe location for the public to take photos with the markers. Taking selfies with the markers on highways is unsafe and discouraged.
These pavement markings are in addition to an ODOT initiative completed in 2021 to add more than 400 updated historic Route 66 signs statewide to better guide travelers. These signs are available for cities to order for their segments of the route.
Requests from cities for pavement markers may be emailed to [email protected] with a map and a description of the proposed location and an official, signed letter as part of the documentation. The form and the guidelines also may be found online at https://oklahoma.gov/odot/citizen/route-66.html 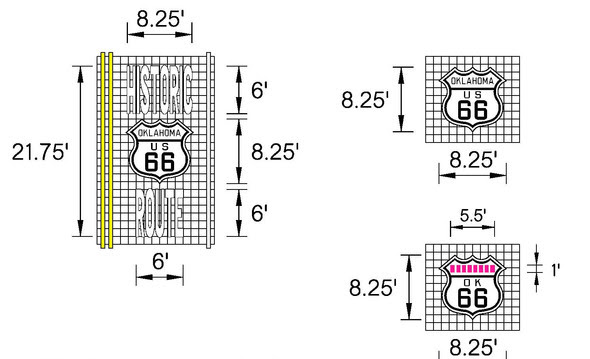 These new pavement marking designs will be made available to Oklahoma cities and counties with sections of state and federal highway within their jurisdiction along historic Route 66.
Post Views: 0