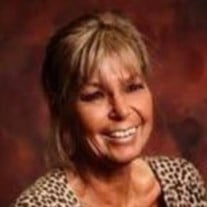 Kelly Colleen Highland was born on August 26, 1961 in Grove City, Pennsylvania to Harry Alan McCurdy and Sandra Lee (Reiser) McCurdy. She passed from this life on Monday, June 8, 2020 in Owasso, Oklahoma at the age of 58 years. Kelly was raised and educated in Collins, Ohio and graduated with the Western Reserve High School Class of 1979. She spent most of her working life as a Mortgage Lender and was a well-known name in the Tulsa market for over 30 years. Kelly was an avid runner in her earlier years and enjoyed a variety of past times such as talking on the phone with friends and family, loving dogs and supporting local dog rescues, but most of all she enjoyed hearing from her grandchildren. She will be remembered as vivacious and full of life. She was always available to lend a listening ear and a kind word of encouragement. She was a loving mother, daughter, sister, and friend.

Memorial service will be held later this summer in Collins, Ohio. In lieu of flowers the family request donations be made in Kelly’s memory to Huron County Humane Society in Norwalk, Ohio.