Spread the love
Just in time for National Bike Month in May and Bike to Work Day on May 20, cyclists and hikers throughout Oklahoma now have a new map-based mobile app for active transportation routes in the state.

Available on both Apple and Android devices, the MoveOK app helps users find local, state and national trails and points of interest, including rest stops and picnic areas. Users can save their favorite routes and record their trips by time, distance covered and average speed in the app.

MoveOK also shows important roadway data, such as elevation profiles, traffic counts and shoulder profiles with widths and rumble strip information, to help users plan their excursions. Oklahoma Transportation developed the app with involvement from bicycle advocates, planners and members of the state Legislature for about $150,000 through an existing technology contract.

“With the MoveOK app, cyclists, hikers and other trail users in Oklahoma now have a great mapping tool available to them in their pockets, backpacks or strapped to their handlebars. Oklahoma Transportation is excited to be able to offer this service for residents and visitors alike. The release of MoveOK also coincides with Oklahoma’s recent establishment of its segment of U.S. Bicycle Route 66, which adds 400 miles of historic Route 66 to the national Bicycle Route System,” said Rick Johnson, director of project delivery for the Oklahoma Transportation Cabinet, which includes the Oklahoma Department of Transportation and the Oklahoma Turnpike Authority.

The department also unveiled new signage for U.S. Bicycle Route 66 to be placed along state highways, city streets and county roads in Oklahoma that were part of the iconic route. The sign was debuted on the heels of the American Association of State Highway and Transportation Officials approval of Oklahoma’s application to add the historic route through the state to the U.S. Bicycle Route System. This designation connects Oklahoma’s bike route with portions previously designated in Kansas and Missouri and is expected to attract riders from across the country.

U.S. Bicycle Route 66 is one of several trails featured in the MoveOK app, which also includes the Chisholm Trail and the Oklahoma Adventure Trail among others. More featured routes and popular routes may be highlighted in the future. 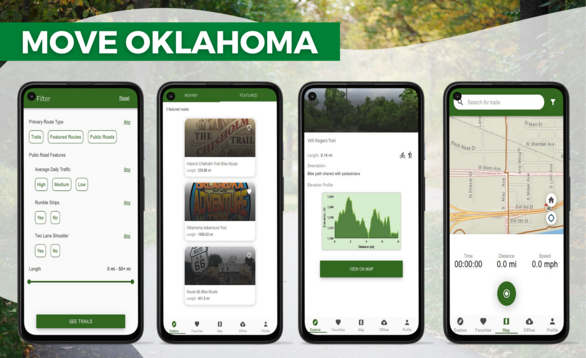 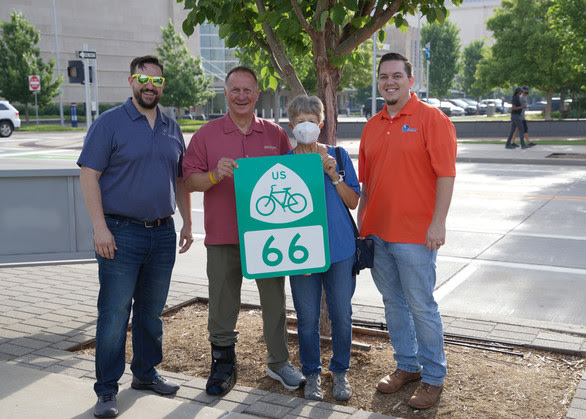