Oklahoma Transportation Highlights: A Look Back and Ahead

01/15/2021 – Oklahoma infrastructure improved significantly in 2020 with more than 200 highway projects completed across the state in spite of the pandemic and a shift in how operations were conducted. Seeing work zones means you are seeing progress. Though there was temporarily less traffic on Oklahoma highways due to the pandemic, the department’s work did not slow down or shut down. The department appreciates the continued partnership of the public to drive safely in highway work zones as progress happens.

ODOT crews as well as those at the Oklahoma Turnpike Authority and the Oklahoma Aeronautics Commission continued their dedicated work to improve transportation for Oklahoma residents and travelers. The accomplishments are too many to list, so here are some of the high impact feats from 2020: 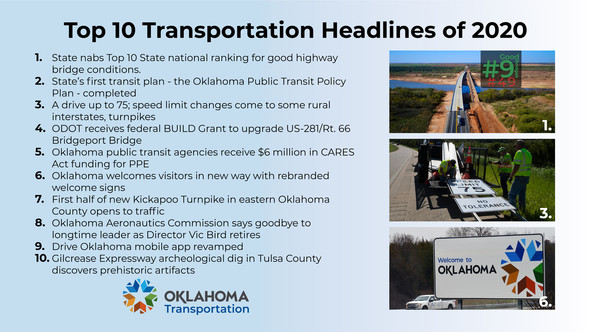 1. Top Ten Status was achieved as Oklahoma was named 9th, up from ranking 49th in 2004, in the nation for good bridge conditions based on the remaining number of structurally deficient bridges on the state highway system. The improved conditions resulted from a 15-year journey that took dedicated focus from the department with the support of Oklahoma’s governors, legislators and congressional delegates. The focus does not waver as efforts continue to move Oklahoma further into the Top Ten in this category.

3. The Oklahoma Transportation Commission approved speed limit changes on nearly 400 miles of rural interstates, shifting the maximum speed up to 75 mph after careful consideration during comprehensive traffic safety studies. The OTA Board of Directors also raised speed limits on sections of rural turnpikes to a maximum of 80 mph.

6. Welcome to Oklahoma always means something special, and thanks to new signage bearing the new state logo it looks special too. 85 new signs went up at interstate and highway entrances across the state, replacing the old and worn signs. This effort to put Oklahoma’s best face forward to travelers entering our state coincided with Lt. Gov. Matt Pinnell’s announcement of the new state brand. Additionally, signs with the new logo were added at the State Capitol Complex in Oklahoma City. 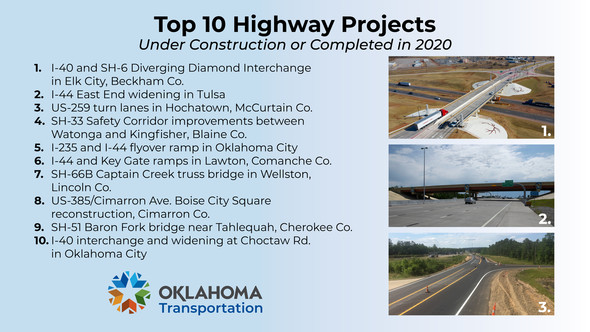 Crews and contractors quickly created health safety protocols to allow work to continue safely in 2020 during the pandemic. Their efforts and dedication to keeping projects on track cannot be understated and resulted in 221 highway construction projects finished in 2020. The list above highlights a few projects that made an impact last year.

1. Oklahoma’s first Diverging Diamond Interchange was completed at I-40 and SH-6 in Elk City in western Oklahoma. This innovative design opened to traffic in September and has improved operations and safety for the high volumes of truck traffic and the passenger vehicles that use the interchange. The project also highlights Elk City through custom aesthetics, including elk statues, lighted oil derricks and antlers painted on the slope walls. These were added to the project thanks to the partnership of the City of Elk City. See more about the new interchange here.

2. The decade-long major reconstruction of the I-44 East End corridor in Tulsa completed in fall 2020. Four miles of I-44 were widened from four lanes to eight between the eastern I-44/I-244 junction to the I-44/SH-167 interchange. Several deficient bridges were replaced and two interchanges were rebuilt to improve safety and accommodate the growing traffic in the area. In all, five major reconstruction projects totaling more than $120 million have transformed this interstate corridor since 2009, which serves as a gateway for travel and commerce into Tulsa and Catoosa.

3. The department addressed safety concerns along the US-259 corridor near US-259A and Lukfata Trail Rd. in the booming area of Hochatown and Beavers Bend State Park by adding dedicated left-turn lanes and intersection modifications. These modifications, paired with speed limit reductions implemented in 2018, have improved safety for the traveling public. All this was completed before Memorial Day so the benefits could be maximized and disruptions minimized.

There is much to look forward to in 2021 in Oklahoma transportation. Look ahead with us at just some of the projects set to complete or break ground in 2021. 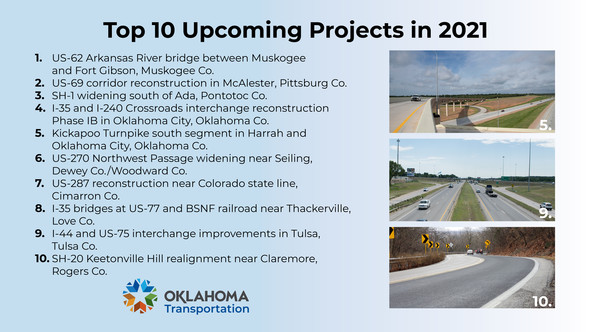 5. It only took five days of 2021 to celebrate a headline: the south segment of the new Kickapoo Turnpike opened Jan. 5, connecting two major interstates – I-40 and I-44/Turner Turnpike – in eastern Oklahoma County. This new route provides a new way for drivers to move north and south in this area, relieving congestion in the Oklahoma City area as well as opening a pathway for the journey between OKC and Tulsa.

9. The first of five work plans to improve the I-44/US-75 interchange and I-44 corridor between the Arkansas River and the western I-244 split in Tulsa is scheduled to start in early 2021. This $90 million project is the single largest construction contract for a highway project in Tulsa. It will widen I-44 from four lanes to six between the Arkansas River and Union Ave., replace five bridges and also construct some elements to be connected in later work packages. The project is expected to take just more than two years to complete.

10. This $44 million project will improve SH-20 from four miles east of US-169 at S4080 Rd., extending east four miles to S4110 Rd./Franklin Road west of Claremore in Rogers County. The SH-20/Keetonville Hill area is a high-maintenance segment due to frequent landslides that cause slips and erosion. The highway will widen to a five-lane curb and gutter section to the west of the hill and will be realigned to cross the top of the hill in a four-lane configuration. Work is expected to start in late spring 2021 and take nearly a year and a half to complete.

Stay tuned for more improvements in 2021 by following ODOT on Twitter and Facebook @OKDOT. Check out what is coming in the department’s Eight-Year Plan at https://oklahoma.gov/odot/programs-and-projects/8-year-construction-work-plan.html.