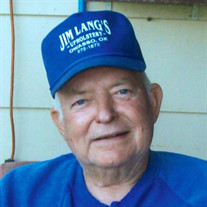 Jim Lang was born on February 1, 1936 in Tulsa, Oklahoma to Lee Oscar Lang and Maude Engles. He died on Thursday, January 7, 2021 in Owasso, Oklahoma at the age of 84 years. He was raised and educated in Tulsa and graduated with the East Central High School Class of 1955. Jim spent most of his working life as an Upholsterer with American Airlines for 30 years. He was married on August 14, 1977 in Tulsa to Carolyn Ruth (Buhl) Lang. Jim had most recently been attending Simple Southern Baptist Church in Owasso. In his spare time, he enjoyed a variety of past times such as fishing, hunting, attending high school football games, and hanging with his buddies in his shop.