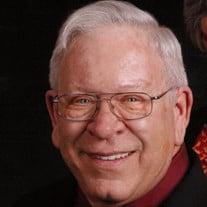 Rev. Dr. Charles Johnston Freeland III was born September 8, 1940, in Rayne, Louisiana, to Charles Johnston Freeland, Jr., and Mary Alice Winn Freeland. He passed away peacefully at his home in Owasso, Oklahoma, Friday, June 26, 2020, at the age of 79 years. Charles completed his secondary education in Crowley, Louisiana, and graduated with the Crowley High School Class of 1958. He earned his Bachelor of Arts degree from Davidson College in North Carolina and his Master of Divinity and Doctor of Ministry degrees from Austin Presbyterian Theological Seminary in Texas.
Dr. Freeland served churches in New Orleans from 1965-1971, then Hot Springs, Arkansas, from 1971-1981, before being called to become the Organizing Pastor of the First Presbyterian Church in Owasso from 1981-1988. Following the organization of the Owasso church, he served as the interim pastor for eight Presbyterian churches in eastern Oklahoma and southern Kansas. He honorably retired from the Eastern Oklahoma Presbytery in 2005 and became the Pastor Emeritus of the First Presbyterian Church in Owasso in 2006.
While serving his communities in New Orleans and Hot Springs, Dr. Freeland was instrumental in addressing systemic inequality and supporting youth education. He also served on various committees of the Church World Service including Resource Development, Long Range Planning, and the Board of Directors. He served as the budget chair for two presbyteries. Giving back to his alma maters, Dr. Freeland was a member of the Board of Visitors for Davidson, and the Board of Trustees for both Austin Seminary and Lyons College, formerly Arkansas College.
He truly valued his community building and development and was involved as a member of the Owasso Chamber of Commerce from 1981-2020 and the Lions Club of Owasso serving as president from 1987-1988. Dr. Freeland was an active member of the Owasso Rotary Club, serving on the International Committee, as President, and Paul Harris Fellow. He and his wife hosted Rotary and AFS International exchange students. In 2008, Dr. and Mrs. Freeland were named “Mr. and Mrs. Trail Days”, an honor for long-standing members of the Owasso community who have contributed to its growth and development. A great joy of his was his on-time role playing Santa Claus in the Owasso Christmas Parade.
Dr. Freeland was an avid reader, a continuous learner, and had numerous hobbies that he pursued with vigor. He built an amateur small plane, sailed through the Caribbean, taught friends and family how to hunt, ran a marathon, designed furniture, sang in the Owasso Community Choir for 11 years as well as the John Know Presbyterian Church choir for 31 years. He explored Israel and the Mediterranean on his quest to learn about biblical archaeology. A member of the Experimental Aircraft Association, he was also the Young Eagle Coordinator – giving free airplane rides to kids and teaching ground school. (He said that was a fun assignment!).

Those family members he leaves behind who hold many cherished memories include his wife of over 56 years, Sandy Freeland, their two children, Charles J. Freeland IV and his wife Susie, Mary Kay Freeland Cook, four grandchildren, Chelsea Freeland, Rowdy Freeland, Katherine Cook, and E. Wilson Cook IV, two brothers, Tom Freeland, and Joe Freeland and his wife Charlotte, and a host of other relatives and numerous friends.
He hopes others will continue his legacies of joy of life, love of God, and community involvement.
A public memorial service honoring his life will be announced at a later date. The family requests memorial contributions be made in his memory to First Presbyterian Church of Owasso, 12800 East 85th Street North, Owasso, Oklahoma, 74055, or Rotary Club of Owasso, c/o Chris Wheeler, Treasurer, Prosperity Bank, 12041 East 96th Street North, Owasso, Oklahoma, 74055. Arrangements and services were entrusted to Mowery Funeral Service of Owasso.
www.moweryfs.com
Post Views: 75