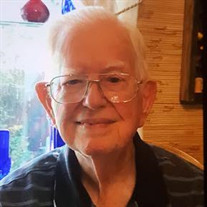 Sidney Dwayne Ellis was born to Jewel “J.W.” and Irene Goodson Ellis on October 21, 1930, in Foss, Oklahoma. He was the oldest of five children. He was class Valedictori-an as a 1949 graduate of Dill City High School. Later that same year, Sidney married his high school sweetheart, Maxine Whinery of Dill City, on October 1. They recently cele-brated 71 years of love-filled marriage.

Sidney and Maxine moved to Abilene, Texas, in 1950 where he attended Abilene Chris-tian College. He was a dedicated student and condensed a four-year education degree into three years to graduate in 1953. Following his graduation, he began his preaching career that spanned six decades. Sidney first preached to a small church located at Ames, OK, which is outside of Enid. The family moved a lot because of his military ca-reer, being in the Lord’s army! After Ames, his wife Maxine, and two sons, Max Dwayne and Kenny, were moved to Boise City, OK. From there, they moved to Akron, CO, and then to Canon City, CO. The family grew to five members in Canon City with the birth of Janice. The next move was to Colorado Springs, CO, where he worked with the West Pikes Peak Church of Christ for seven years. He moved his family back to Oklahoma for several years to work with Westside in Norman, Northside in Tulsa, and then with Lee and Walnut in Sapulpa. The next move was to Lincoln, Nebraska, for five years, and then to Topeka, KS. Finally, in 1985 he and Maxine moved to Owasso. Sidney worked with the church here as the pulpit minister and director of the Biblical School of Studies; he also served as an elder for fifteen years.

Family, and friends, knew Sidney as a teller of jokes. He had a broad collection of funny stories and would never tire of telling them to friends and family. He would tell, and learn new ones, at the Owasso McDonald’s ROMEO Club. ROMEO means Retired Old Men Eating Out.

Sidney shared his love of the Lord and God’s Word with many, many people. He was a respected gospel preacher and an encourager to many others in the preaching profes-sion. All who knew him are blessed with the memory of such a godly, encouraging man.